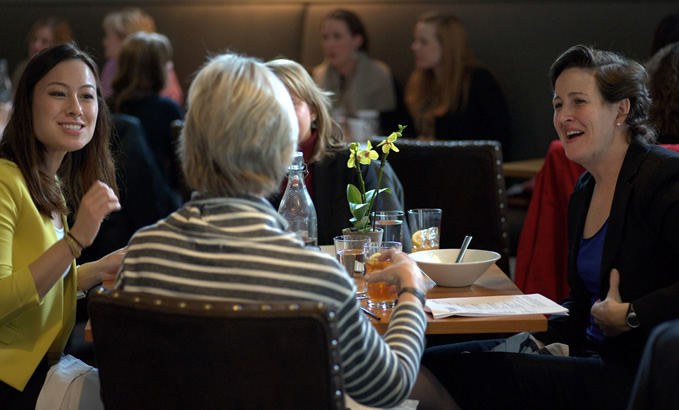 The Roanoke Chapter, formerly known as the Roanoke/New River Valley Chapter, was officially recognized as a chapter by the state organization in 1987. The chapter has grown from informal lunch meetings of four to five women in the mid to late 1970s to the over 40 current members. Networking, mentorship, and professional and personal support continue to be its hallmarks.

The Roanoke Chapter holds regular monthly meetings, annually offers free or low cost CLEs to Roanoke Valley attorneys, and has traditionally provided pro bono support to local organizations such as Total Action Against Poverty (now known as Total Action for Progress), the Roanoke Valley Court Appointed Special Advocate Program, and the Turning Point women's shelter. In local schools, the chapter has participated in "Law Day" poster contests and in the Rule of Law Program in conjunction with the Virginia Law Foundation and the Virginia Bar Association. Service to the community is an important characteristic shared by the members.

Please join us for our monthly luncheons, socialization, officer announcements, and related discussions.

VWAA’s Member Recognition Committee is excited to share the achievements of our members! If you’d like to include any achievements in our next newsletter, please contact Nanda Davis at nanda@davislawpractice.com.

On December 19, 2019, the Virginia Women Attorneys Association, Roanoke Chapter's Judicial Screening Committee interviewed four candidates for a vacancy in the Twenty-Third Judicial Circuit of Virginia, Roanoke City, Salem City and Roanoke County Circuit Court, occasioned by the retirement of the Honorable William D. Broadhurst commencing March 1, 2020. The results of the screening interviews and additional information about each candidate can be found in the letter issued by the Virginia Women Attorneys Association on January 14, 2020.

On May 15, 2019 the Roanoke Chapter held their annual elections and a roundtable discussion on the topic of mentoring. The speakers for the occasion were Kristen Johnstone, Michael Darmante, and Erin Ashwell.

The Roanoke Chapter of the VWAA hosted a CLE entitled "A Sentencing Alternative for Offenders with Serious Mental Illness in the 23rd Judicial District: Therapeutic Docket" with Judge Jacqueline Talevi at Blue Five on April 4, 2019.

A Success Project Roundtable at Carlos Brazilian Internation Cuisine in Roanoke, VA was held on September 20, 2018. The topic was "Having a Game Plan For Your Career" with a focus on starting your own practice. Speakers were Nanda Davis and Leigh Strelka.

On April 18, 2016 a CLE was held by the Roanoke Chapter at Blue Five in downtown Roanoke. Erin Ashwell lead the topic discussion on Appellate Preservation.