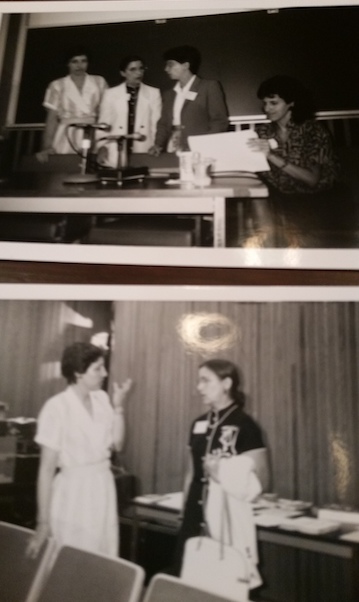 In 1987, Judge Ruth Bader Ginsburg, then a member of the U.S. Court of Appeals for the D. C Circuit, participated in the “Institute on Women and the Constitution” a week long event co-sponsored by the VWAA and the Council on the Status of Women and held at the University of Virginia.  Judge Ginsburg was interviewed by Jane Schukoske for the VWAA publication “Lex Claudia” and was featured on that issue’s cover.

Below are select excerpts from that interview that are worth revisiting.

‘We must involve men in the role of bringing up children.  The more tightly you associate women with children, as you do by giving special pregnancy leave, but no comparable leave for other temporarily disabling conditions, the more you go against this.  If women have the job of raising children alone, they will always be in a state of exhaustion.’

Judge Ginsburg would give no comment on the Bork nomination [referencing Robert Bork a   noted conservative judge who also sat on the D.C. Circuit Court of Appeals.]  However, she  said she is ‘uncomfortable about ideological tests for nominees.’  She believes that the country would end up with ‘colorless people on the bench’ if only people who have not put themselves behind a cause are selected.

As a matter of judicial technique, Judge Ginsburg believes that the opinion in Roe v. Wade went farther than necessary to hold the statute unconstitutional, and that this has provided a target for abortion opponents.  She respects judicial restraint –deciding a case narrowly on its facts—as a principle that leads to lasting precedent.

During the interview, Judge Ginsburg was presented with the suggestion that she could be appointed to the U. S. Supreme Court in a Democratic administration.   Her response was reported to be characteristically calm and confident and willing.  She readily identified other women who also have the qualifications to serve on the highest court.  The article concluded, “It is exciting to think about the contribution Judge Ginsburg could make on the Supreme Court. Her careful approach could build insightful and enduring precedent on the constitutional basis of sexual equality and on other vital issues that come before the court.”

Truer words could not have been spoken.  Rest in peace RBG, you have made our world a better place.